Balekin Greenbriar, also known as Prince Balekin, was a faerie and a prince of Elfhame. He was the son of his unnamed mother and firstborn child of Eldred Greenbriar, great-grandson of Mab Greenbriar, brother to Elowyn, Dain, Rhyia, Caelia and Cardan Greenbriar, uncle to Oak and brother-in-law to Jude Greenbriar née Duarte. Prince Balekin led what was known as the Circle of Grackles.

Balekin had black hair and silver eyes. His eyes are reminiscent of owl's, which are his animal feature, as all of Eldred's children have them. He also had pointed ears due to his faerie heritage. He had thorn-like spikes running along with his fingers and up to his arms. He is considered very handsome by faerie standards just like his brother, Cardan. They bear a striking resemblance to each other.

He was exceedingly wicked and scheming. He was also incredibly abusive and neglectful. He abused his brother Cardan by both physically beating him and tormenting him mentally. When Balekin defeated Cardan in a sparring match in which he taunted and mocked his brother the entire time, he stepped on Cardan and then beat him with a whip. Cardan also said that Balekin mocked him for being bested by Jude. Balekin is his most generous when he would somehow become the greatest beneficiary of his largess.[1]

Balekin was the one who told Madoc where to find his wife, Eva Duarte, and his daughter, Vivienne, who Madoc had believed to be dead.

Prince Balekin was living with his youngest brother, Prince Cardan, for a while at Balekin's home, Hollow Hall. While on a spy mission for Prince Dain, Jude Duarte witnesses Balekin abusing Cardan. He tells Cardan that he is weak and that he orders the beating because he "loves" Cardan. This is how Jude comes to realize that Cardan has come by "his cruelty honestly in Balekin's care. He has been raised up in it, instructed in its nuances, and honed through its application."

Balekin tried to find out how Prince Dain was involved in the death of Liriope, but Dain's spies, the Court of Shadows prevents this from happening. Instead, with the help of Madoc, Balekin began scheming to take the throne during Prince Dain's coronation ceremony.

When High King Eldred gave up his power and prepared to crown Prince Dain, Balekin killed his sister, Princess Elowyn while Madoc killed Prince Dain. Balekin proceeded to behead Taniot, Dain's mother who had rushed to the aid Princess Elowyn, and run his sword through the former High King Eldred. Due to the magic of the blood crown, Balekin could only be crowned by another member of the Greenbriar line. He demanded that one of his two remaining siblings, Princess Rhyia and Princess Caelia, crown him. Princess Caelia agreed to crown him in order tostop the bloodshed, but was killed by the Ghost before she could do so. Princess Rhyia killed herself rather than making Balekin the High King. The whereabout of Prince Cardan were unknown throughout the entire event.

Lord Roiben of the Court of Termites gave Prince Balekin three days to become High King, or else the Courts would leave without swearing loyalty to the crown.

Balekin hosted a feast at Hollow Hall where he planned to have Prince Cardan crown him High King and invited all of the Courts to watch and support him. However, the Court of Shadows stopped this from happening and had Oak, the son of Prince Dain, crown Prince Cardan as High King before Balekin could get the crown.

Prince Balekin was then sentenced to the Tower of Forgetting for his treasonous acts.

The Tower of Forgetting

From the Tower of Forgetting, Balekin had been trying to contact King Cardan. Despite being imprisoned, Jude notes that Prince Balekin barely looked discomfited. When Jude Duarte visited the Tower of Forgetting to hear what Balekin's message was, she was slapped by one of the guards and the Ghost let Balekin out of his cell.

Ambassador to the Undersea

Queen Orlagh of the Undersea takes Jude as a prisoner and takes Prince Balekin as her ambassador. Not knowing about her immunity, Balekin attempts to glamour Jude to act as his spy. Believing she is fooled by his magic, he think that he made her think that they were friends and even forced her to kiss him "as if he were Cardan".

When Jude is returned to the land, Balekin tasks her with assassinating Cardan via poison, which she disregarded, as she was immune to his charms. That same night, Balekin poisons Cardan himself and demands Jude turn out her pockets, which she refused to do. It was then that Balekin realized she had been tricking him the entire time and was only playing along with his tricks and schemes. He offers her the antidote if she gives him the blood crown. To make sure it's the antidote he gives a mouthful to Jude who spits it into the clean poison container.

Prince Balekin then challenges Jude to a duel, but surrenders just as he stabs him in the neck, killing him.

Balekin brings Cardan to Hollow Hall after Cardan has been sent from the Palace in disgrace. He tells Cardan that he is supposed to make him into a proper Prince of Elfhame. Balekin tells Cardan that if he hadn't taken him in, Cardan would probably have been sent to be fostered in one of the low Courts where he would have not done well or have been safe. Balekin has taken Cardan in because he is one of the few people who sees Dain for what he is and is therefore valuable to him. Balekin informs Cardan that he "will choose clothing suitable to your station, stop scavenging what he can find from the kitchens or steal from banquets, learn some modicum of swordplay, and attend the palace school where he will do what the teachers ask of him."[2] Balekin then has an ensorcelled human servant whip Cardan, telling him that his punishment is to "experience the humiliation of being beaten by a creature who ought to be your inferior. And every time he thinks of how disgusting mortals are, he is to think of this moment, when he was lower than even that. And to remember how he willingly submitted, because if he doesn't, he will have to leave Hollow Hall and Balekin's mercy."[3]

Balekin and Madoc work together to take the throne. Although Madoc plans to betray Balekin and use Oak to become regent and rule until Oak comes of age, where he can pull the strings as Oaks closet advisor.

Cardan and Balekin have a bad relationship because Balekin is abusive toward Cardan, both physically and emotionally. Balekin believes Cardan is too weak. Balekin forces Cardan to spar with him, taunting and mocking him the entire time. Afterward, Balekin has a human servant beat Cardan with a belt and tells him that he is "punishing him because he loves him." However, Balekin was the only sibling of Cardan's who took him in when Dain got him kicked out of the palace.

Dain is Balekin's younger brother who he often spies on. Dain claims to Jude that he and Balekin never got along well. Dain says it's because Balekin has been too ambitious to have a relationship with a rival for the throne. They are often at odds because they are both trying to be chosen by their father to become the next High King. They scheme against each other and don't trust one another at all. Dain is killed by Balekin in his own attempt for the throne.

Balekin and Elowyn are often at odds. Due to the fact they are both trying to be chosen by their father to become the next High Monarch.

Not much else’s is known about their relationship, however, The Roach does state that Balekin might marry Elowyn, which has happened before among the Gentry. All though Elowyn would most likely stab Balekin than marry him.

Balekin never took much notice to Jude until the beginning of The Wicked King in which he understands she's to be taken seriously due to the fact she succeeded in tricking Cardan to become the High King under her power. Balekin always treated Jude as someone who's below him. He insults her constantly throughout the series, even when he is eventually killed by Jude after poisoning Cardan. During Jude's kidnapping by the Undersea, Balekin, Queen Orlagh and Nicasia are not aware of the fact that Jude is immune to their glamour. Balekin, just like Nicasia tries to understand her and Cardan's relationship during her stay. Balekin attempts to get information out of Jude multiple times and eventually asks Jude to imagine he was Cardan and then asks her to kiss him. 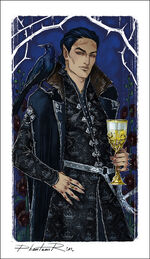 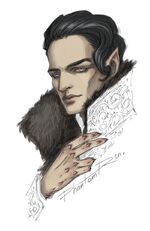 Retrieved from "https://the-folk-of-the-air.fandom.com/wiki/Balekin_Greenbriar?oldid=8531"
Community content is available under CC-BY-SA unless otherwise noted.