Dain Greenbriar, also known as Prince Dain, was a faerie and a prince of Elfhame. He was the son of the consort Taniot and third-born child to the Eldred Greenbriar, great-grandson of Mab Greenbriar, father to Oak, brother to Balekin, Elowyn, Rhyia, Caelia and Cardan Greenbriar and brother-in-law to Jude Greenbriar née Duarte. Prince Dain led what was known as the Circle of Falcons along with an undercover organization of spies called the Court of Shadows.

Dain was considered very handsome, he was tall and lean like most fey. He had silver-gray eyes, pointed ears, and golden curls. Like all of King Eldred's children, Dain had an animal feature; from his torso down are the hind legs of a deer and he had small horns just above his brow. His arms appeared strong and he had long fingers.

At first, Dain seemed kind, generous, and helpful toward Jude Duarte, who described him as being known to be "honored and honorable." He was later revealed to be violent and manipulative, prioritizing power over all else.

At some point, Prince Dain had an affair with one of his father's consorts, Liriope, who became pregnant. The unborn child's prophecy was that "if the child is born, Dain will never become king." Wanting to secure his position as the future High King, Prince Dain sent one of his spies, the Ghost, to poison Liriope with blusher mushroom in an attempt to kill both her and the child.

Prince Dain believed the child to be dead, but Oriana, a close friend of Liriope's, had responded to Liriope's plea of aid to save her child and raise him as her own. Many were lead to believe that the child, named Oak, belonged to Oriana, including Prince Dain.

Although Dain was the third-born child, he always wanted the crown and was willing to overcome all obstacles so that he may sit on his father's throne. The Court of Shadows is believed to have been created by him for the sole purpose of exploiting Prince Balekin's ambitions to overtake the throne. Prince Dain believed that he was the most loved and respected amongst his siblings in the eyes of his father.

After witnessing her skill at the Summer Tournament, Prince Dain visited Jude Duarte at Madoc's Stronghold. He expressed an interest in her ability to lie and asked her to be a spy for him as a member of his Court of Shadows. In exchange, Prince Dain placed a geas on Jude that protected her from all faerie glamour and enchantments except for his own. Prince Dain told Jude that he would never be cruel to her for the sake of delighting in it and if she swore herself into his service, she would gain power in his court once he became High King.

After Jude completed her first mission from Prince Dain, he introduced her to the Roach, another of his spies, and brought her to the Court of Shadows. Prince Dain used his power over her to make sure she never told anyone about her service to him or any of the other spies. He also suggested to Jude that she should research mithridatism, the process of eating poison to build up immunity.

A few days before the coronation, Prince Dain visited Jude at Madoc's Stronghold again. He was furious with her for stabbing Valerian and compelled Jude to pick up a dagger and stab herself through the hand, then removed the compulsion so that she would stab herself willingly. He wanted Jude to prove her devotion to him with blood and bone. He told her moving forward, she should practice her power by appearing powerless.

At Prince Dainʻs coronation ceremony, former High King Eldred was in the process of crowning Prince Dain as the new High King when Dain was killed by Madoc as part of a scheme to get Prince Balekin on the throne.

At first, Dain appears to Jude as someone who wants to help her. He offers her a position in his Court of Shadows, and although that wasn’t what Jude wanted, she accepts the offer and the geas he gives her to resist enchantments. As the most likely heir to the throne, Jude knows Dain has a lot of power and that he would be able to protect her. She describes him as "honored and honorable." However, when Dain makes her stab her own hand willingly to prove her devotion to him, she is furious with him and begins to wonder if he is as really honorable as he appears. After his death, Jude continues to learn more about what Dain did and what he was really like and her opinion of him changes and she no longer views him as an honorable person.

Dain is Oak's father. He wanted Oak dead because there was a prophecy that said that Dain’s child would lead to his death. Dain attempted to kill Oak by poisoning Liriope with blusher mushrooms. However, even though Liriope died, Oriana managed to save Oak by cutting him out of Liriope’s womb. To Dain’s knowledge, Oak didn’t survive Liriope’s poisoning and believes Oak was never born.

Dain is Balekin's younger brother who he often spies on. Dain claims to Jude that he and Balekin never got along well. Dain says it's because Balekin has been too ambitious to have a relationship with a rival for the throne. They are often at odds because they are both trying to be chosen by their father to become the next High King. They scheme against each other and don't trust one another at all. Dain is killed by Balekin in his own attempt for the throne.

Liriope and Dain had a tryst while Liriope was involved with Dain's father, High King Eldred. Their relationship was not serious, just a dalliance and distraction. Liriope got pregnant with Dain's child. Dain was not happy because of a prophecy that stated his child would lead to his demise. As a result, Dain ordered Liriope and the child's death in order to save himself. 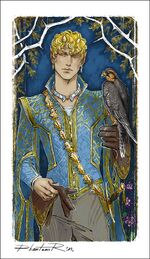 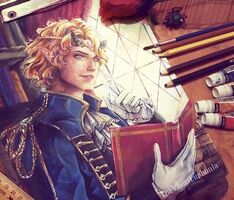 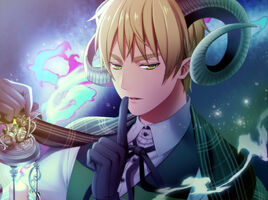 by BelleDeesse
Retrieved from "https://the-folk-of-the-air.fandom.com/wiki/Dain_Greenbriar?oldid=8506"
Community content is available under CC-BY-SA unless otherwise noted.