Elowyn is described as having glittering gold skin and hair the deep green of ivy.

Jude always thought of Elowyn as the kind sister, however she soon discovers that she is sorely mistaken.

During Prince Dain's coronation ceremony, Prince Balekin made a move with the Grand General, Madoc, to seize the throne. As this happened, Prince Balekin thrust out his arm towards Princess Elowyn and his blade pierced her throat.

At first, the wound looked harmless, but after a moment, blood started pouring out. She staggered to her hands and knees and Taniot, the mother of Prince Dain, rushed to Princess Elowyn's aid in attempt to stem the blood with the skirts of her dress. However, despite her efforts, Princess Elowyn died.

Balekin and Elowyn are often at odds, due to the fact that they are both trying to be chosen by their father to become the next ruler of Elfhame.

The Roach states that Balekin might marry Elowyn, which has happened before among the Gentry. Although Elowyn would most likely stab Balekin before marrying him.

Elowyn has a rocky relationship with Prince Dain, due to the fact both of them are trying to be chosen by their father to become the next ruler of Elfhame Dain often sends his spies to spy on Elowyn and gather information about her actions.

When Jude was eleven, she was spotted hiding under the banquet table at one of the revels by a particularly bored member of the Gentry. He dragged her out by one foot, kicking and squirming. Then he compelled her to drink faerie wine and danced her around the hill. She felt dizzy and sick. Princess Elowyn found her at the end of the revel, puking and crying. Elowyn didn’t ask Jude a single thing about how she got that way, just handed her over to Oriana like she was a misplaced jacket. 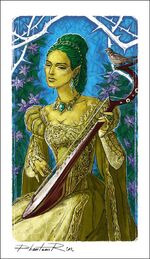 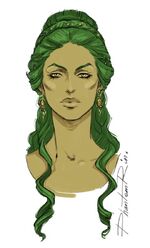 by PhantomRin
Retrieved from "https://the-folk-of-the-air.fandom.com/wiki/Elowyn_Greenbriar?oldid=8514"
Community content is available under CC-BY-SA unless otherwise noted.