It is described as a perfectly balanced sword with diamonds and sapphire embedded in its hilt. The guard and pommel are unadorned and elegantly shaped. The blade is etched along the fuller with a barely visible pattern of vines. It's said to bring the welder luck.

Nightfell was gifted to Jude by Madoc. Nightfell was crafted by Jude's father, Justin Duarte, for Madoc while he lived in the Faerie realm.

As a sword is Jude's weapon of choice, she rarely parts from it. When she does, it is in the unfortunate incident of seven assassins attacking her in the dead of night.[1]

After Cardan exiled Jude to the mortal world, she took Nightfell with her. When she went back to Faerie she didn't bring the sword with her but Taryn Duarte brought it back when she rescued her sister at Madoc's camp.

As Queen, Jude sometimes carried the sword around in a new, glamorous sheath.[2]

Images of Jude with Nightfell 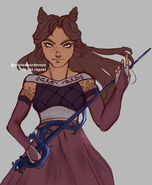 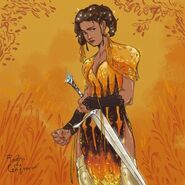 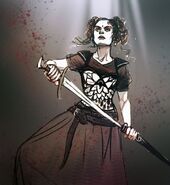 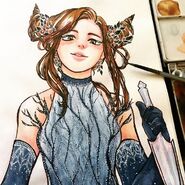 by ifros studio
Add a photo to this gallery

Retrieved from "https://the-folk-of-the-air.fandom.com/wiki/Nightfell?oldid=7105"
Community content is available under CC-BY-SA unless otherwise noted.