She is a tiny, delicate girl. Her skin is the dappled brown of a doe, her hair a cloud of white around her head like a dandelion, and there's a miniature pair of blue-gray butterfly wings on her back. She’s also got at least some pixie in her, if not some imp.

She likes blowing things up. The Bomb is very blunt while being nice and friendly towards Jude Duarte. She is incredibly loyal to the Court of Shadows. Since she is a spy, the Bomb is very good at being sly and swift. Always eager for an assignment.

The Bomb’s people died in a brutal internecine Court war a century ago, leaving her on her own. She went into the human world and became a small-time crook. She wasn’t particularly good at it. Mostly she was just using glamour to hide her mistakes.

That’s when she met the Roach. He spotted her and he pointed out that while she might not be much of a thief, she was a good at concocting potions and bombs. They went around together for decades. The Bomb described the Roach as being so affable, so dapper and charming, that he’d con people right to their faces, no magic required.

The Roach then had the idea that they should steal from the Court of Bone in the West, however, the con went wrong. The Court carved them up and filled them full of curses and geas. The Court of Bones then forced The Bomb and the Roach to serve them.

They screwed up a job, and Dain Greenbriar got hold of them. He had a scheme for them to betray the Court of Bone and join him. So they did and ended up in Dain’s service instead.

At some point before joining the Court of Shadows, the Bomb and the Roach were taken prisoner by the Court of Teeth.

Jude sees The Bomb before she knows who she is when she pickpockets an ogre at a revel at the High Court.

The Bomb meets Jude when she joins the Court of Shadows. She teaches Jude how to find the weak spot in a building and the pressure point on a body.

After the coronation, Jude asks the Bomb where she is going when everything is done. She tells Jude that she is going to stay in Elfhame with Jude and asks if she has a plan. Jude asks the Bomb, "What do you think about stealing a crown? Right in front of the kings and queens of Faerie?" The Bomb replies, "Just tell me what I get to blow up."

The Bomb is continuing to be a part of the Court of Shadows. They now work towards the protection of the High King and for less bloodshed in Faerie. The Bomb approaches Jude at a revel at the palace. She has intercepted another note to King Cardan from Prince Balekin.

The Bomb shoots at Jude when seeing her at the top of the palace in Elfhame. Mistaking her for the assassin Jude messaged about. The Bomb then later comes to Jude and takes out her stitches.

The Roach and The Bomb have a good relationship with each other. They are playful with each other. They have feelings for each other, but haven't told one another. After the Roach is poisoned, the Bomb tries to find a way to cure him. She unfortunately fails, and as a last resort asks Jude to heal him. Jude is successful and after the Roach wakes up, they confess their feelings for one another.

The Bomb at first is just a teacher of sorts to Jude. When Jude joins the Court of Shadows, the Bomb teaches her how to find the weak spot in a building and the pressure point on a body. Overtime they grow very close, and the Bomb confides in Jude about her feelings for the Roach. The Bomb is grateful when Jude manages to wake the Roach up after he was poisoned. After Cardan is cursed, the Bomb stays by Jude's side loyally and kills anyone that was planning to assassinate Jude. 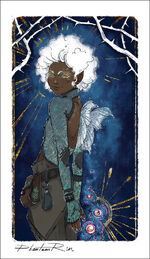 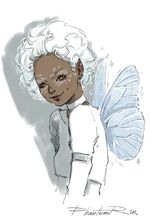 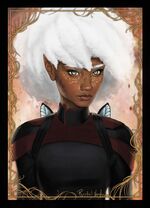 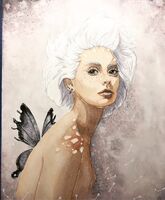 Retrieved from "https://the-folk-of-the-air.fandom.com/wiki/The_Bomb?oldid=8617"
Community content is available under CC-BY-SA unless otherwise noted.